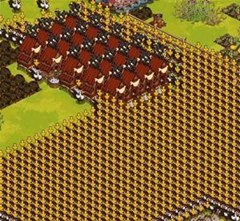 In my earlier post about long-term strategies I promised I'd ask some of my neighbors who do what I call factory chicken farming (Let 1000 Chickens Bloom) if the coyotes that have shown up will change the way they play the game.  The one guy who replied in any detail said that he wasn't sure what he was going to do yet, but he thought that he was losing 50 chickens each time he harvested them pressing "Collect Bonus" using a coop.

At a guess, that sounds like about a 5% kill rate.  Since upgraded coops can protect only adult chickens up to a maximum of 100 per coop, and because you have to feed chicks eleven times to turn them into adults, you'd have to start out with 176 chicks to end up with 100 at that rate.  I could show you how to do the math, but you probably don't want to know.  For 2% it's 126 chickens.

In the accompanying screen shot, you can see that one of my neighbors has 20 coops and more chickens than you can shake a worm at.  He could protect at most 2,000 chickens in the coops and he could earn at most 40,000 XP (plus more in bonuses), but it would take him at least nine and a half hours to click "Collect Bonus" on all the coops.  He already has his chickens, but somebody trying to raise 2,000 of them from chicks to adults would have to start with 3,516, and I think that might be such a waste that most people wouldn't try it.  The same urge toward kindness to animals that makes people spend real money for houseshoes to nurse notional injured critters will keep people from raising notional chickens if 76% of them will be eaten by coyotes.  If you already had 100 chickens outside the coop you'd have one left after you clicked "Collect Bonus" using a coop 90 times. It will leave a bad taste in people's mouths, and it will probably kill off factory chicken farming as a strategy.  I think Zynga has blundered again, and will end up backing down.

I've sent off a query to Zynga customer support asking them if coyotes are going to be around as a permanent feature, but it may take them weeks to get back to me, if they ever do.  On the good side there are no coyote cannons for sale from the foundry.  On the other hand, there is a Coyote Collection.

I'm running a test now, by starting with 120 chicks and harvesting them eleven times to get them to adulthood. The test will take other couple days, but it looks as though the death rate is about 10 percent per feeding, which would leave about 31 chickens out of 100 alive after eleven feedings.  I'll post the final results when they're in.

Test Results Are In

Well, I finished my test and the result is that the death rate per feeding was 7.8%.  After eleven harvests using the chicken coop 49 of my original 120 chicks lived to adulthood, so just 40.8% of them survived.

Oddly, sometimes after a feeding both a coyote and a fox showed up.  Sometimes neither.  I suspect that the Zynga programmers realized that they'd screwed up and were trying to tone down their bloodthirstyness a bit without admitting error.