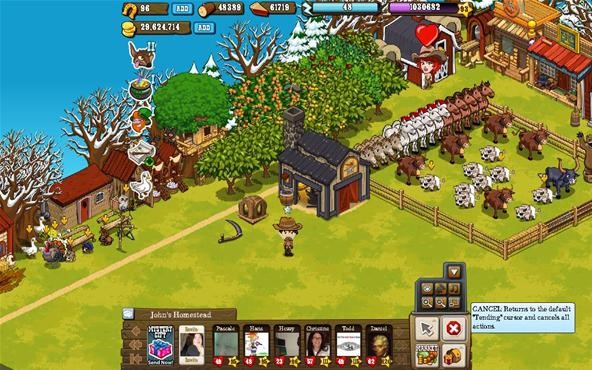 Fads, Fiascos and Good Stuff in FrontierVille This Week

This is the first of what should, with luck, be a series of weekly columns.

It's St. Patrick's Day in FrontierVille and it looks like staying that way for the foreseeable future, which will probably be about ten days.  If you've ever lived in England you know about jackdaws, but I'll explain for the rest of you.  They're small black birds who are notoriously fascinated by shiny things, and they love to peck the foil caps off milk bottles.  The average FrontierVille player has a lot in common with jackdaws.  Every holiday brings a new mission and a shiny new fad.

Flower carts seem to be holding strong, judging from the acreage of flowers my neighbors are planting.

Kissing tree sales seem to be falling, though people are still asking for the collectable items on their wish lists.

(Saint) Valentine's Day seem to be blessedly over.

Elvis chapels litter the homesteads, forgotten for the moment.  Maybe they'll be revived in June.

Injured critters -- so far small white buffaloes or black deer -- show up on your homestead and have to be healed with "critter milk", which is a bit of a pain to beg for but conveniently can be bought for too many horseshoes.  It reminds me of the famous National Lampoon cover – "Buy this magazine or we'll shoot this dog."  I'm not sure how you refuse an animal; you seem to be offered a choice with one option.  I also don't know how many animals we'll be lumbered with eventually.  There is a related collection.

Doctor's Offices showed up along with prairie pox, which turned all the characters green for a while.  Zynga screwed up by making syringes the rarest Doctor's Office collectable, and then had to make them a lot easier to get so that everybody wouldn't stay green for months.  First they were made more likely to turn up as a bonus, and then they were offered as a gift item and finally a miraculous cure showed up from Back East to put an end to it all.  As a fiasco it rates between the horse sales embargo of five months ago and the peach pie/peach cobbler mix up from the last homestead expansion.

The Rango tie in was a cynical ad campaign that had as much to do with FrontierVille as Disney movie prizes do with McDonald's happy meals.  It's over now, except for a few collectable artifacts cluttering the homesteads of the gullible.

Coyotes have shown up, and they actually eat one or two of any chickens that are outside the shelter of newly upgraded chicken coops each time you harvest your chickens.  Fortunately they're easier to scare off than foxes, but a lot of high level players are into factory chicken farming with hundreds of chickens and lots of coops, so coyotes may change the way the game is played if the loss of a couple chickens at each harvest can't be written off as the cost of doing business.  I don't play the game that way, but I'll ask one of my neighbors who does and then write about it next week.

A lot of people have finished their blacksmith's shops and crafted their harvesters, which look like sickles, and feeders, which look like the tops of Chinese stone lanterns.  They can alternately harvest five units of crops or five animals at a time (for five Energy units), and are a treat to use.  A good side effect is that using either one produces lots of crafting collectables, which until now were very rare.  It's like the way post cards have shown up with the Pony Express.

There's a new homestead expansion coming soon which I haven't investigated yet, though Zynga did offer to let me buy a shortcut for 185 horseshoes.  What great guys.  I'll look into it and write more about that next week.