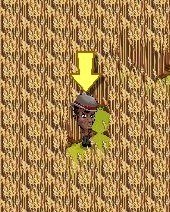 There really are depths of dumbth up with which I will not put, so I won't be spending nine coins to build a Detective Agency in FrontierVille.

Historically, the Pinkerton National Detective Agency was started 1850 but came into its own working for Abraham Lincoln during the Civil War (1861 to 1865, for foreigners and the home-schooled) catching Confederate spies and running their own networks in the South.  The US didn't have a national police force until the Bureau Of Investigation started up in 1908, and Pinkertons served as sort of jobbing detectives for towns too small to have bureaus of their own up through the 1920s.  They also did a lot of union busting and strike breaking.

It's hard to say exactly when FrontierVille is supposed to be set. The Pony Express ran for less than two years in 1860 and 1861, and the transcontinental railroad was finished in 1869.  The Homestead Act was passed in 1861 and most of the prairies were settled in the 1860s.  Barbed wire showed up in the 1870s.  So around that time only the biggest cities would have had a Pinkerton Office – Denver, Omaha and Salt Lake, probably.

A Sheriff is a county officer (=shire reeve) and counties exist in states.  A Marshal is a territorial officer.  Officer, because they're officers of the court.  It's a bit more complicated than that; Ontario still has reeves and parts of Colorado have marshals who seem to be officers of consolidated judicial districts that cover several counties.  If FrontierVille had a cop he'd be a marshal.  It doesn't.  The only detectives a small town would have seen would have been passing through on assignments from the big city offices.

So I'm not building a detective's office until I get a Marshal's Office, and a saloon.  But there's a saying that sod busters build churches and cowboys pay for saloons.  In the interest of symmetry, I won't be building either.

Now I've got a detective in a derby hat standing in the middle of my wheat field and refusing to move until I buy him an office.  He looks a lot like Sammy Davis Jr. though, so he's welcome to stand there as long as he wants.  He gives the place tone in ways cows can't.  Or won't.  I may have to investigate that.